“Adam Kokesh, the gun rights activist arrested after posting an Independence Day video of himself apparently loading a shotgun in Freedom Plaza, will remain in the D.C. jail at least through Monday, a Superior Court judge ruled Friday.

U.S. Park Police brought Kokesh to the District on Thursday to face gun charges related to the video. He was arrested July 9 during a raid of his home in Herndon and had been held in Fairfax County on charges of possession of hallucinogenic mushrooms while possessing a firearm.

Kokesh’s housemates alleged that he was mistreated in the raid, which was led by a Park Police SWAT team and assisted by local police.

Kokesh was posting bail Thursday in Virginia when Park Police arrested him again and took him to the District, according to a spokesman for the U.S. attorney’s office.

Kokesh was charged Friday in D.C. Superior Court with one count of carrying a firearm outside of his home or office. Assistant U.S. Attorney Kevin Chambers called the video a “deliberate and concerted effort to violate” D.C. gun laws.

According to court records, Kokesh posted the 23-second video to YouTube showing him holding a 12-gauge, pump-action shotgun and loading four shells of suspected ammunition while speaking into the camera. Kokesh is then seen racking the slide of the shotgun. A caption in the video says Kokesh is in Freedom Plaza.

When authorities searched his home in Herndon, they found nine weapons, including a .357 Smith & Wesson handgun, a .22- caliber rifle and a Maverick Arms 12-gauge, pump-action shotgun. Police also found ammunition and marijuana, the mushrooms and “other suspected narcotics,” according to documents.”

***
Adam Kokesh did a tour in Fallujah, Iraq with the Marines in 2004 and came home to become an anti-war activist. He ran for Congress as a Republican, had a radio show, a TV show, and has gone to jail for his civil disobedience. He is the host of the ADAM VS THE MAN YouTube channel and podcast, and just released his first book, FREEDOM! 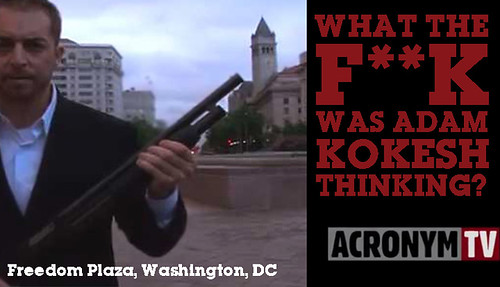