In this clip from the full-length Acronym TV program, Gaza Solidarity Grows as Israel Continues Massacre (http://bit.ly/1ALhy5l) Kash Nikazmrad, an organizer with Students for Justice in Palestine, discusses the current siege on Gaza with host Dennis Trainor, Jr. Nikazmrad echoed the statement issued by Palestinian civil society organizations (http://electronicintifada.net/content/palestinian-orgs-justice-delayed-justice-denied/992)  on 3 October 2009, which reads in part:

“Justice delayed is justice denied. All victims have a legitimate right to an effective judicial remedy, and the equal protection of the law. These rights are universal: they are not subject to political considerations. In the nine months since Operation Cast Lead, no effective judicial investigations have been conducted into the conflict. Impunity prevails. In such situations, international law demands recourse to international judicial mechanisms. Victims’ rights must be upheld. Those responsible must be held to account.

The belief that accountability and the rule of law can be brushed aside in the pursuit of peace is misguided. History has taught us time and time again, that sustainable peace can only be built on human rights, on justice, and the rule of law. For many years in Palestine international law, and the rule of law, has been sacrificed in the name of politics, and cast aside in favor of the peace process. This approach has been tried, and it has failed: the occupation has been solidified, illegal settlements have continued to expand, the right to self-determination has been denied; innocent civilians suffer the horrific consequences. It is now time to pursue justice, and a peace built on a foundation of human rights, dignity, and the rule of law. In Justice Goldstone’s words, there is no peace without justice.”

Nikazmrad went on to say: “There is no reason to let go (…) Justice needs to be served.” 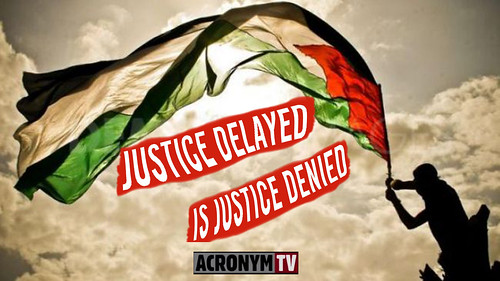