Occupy Wall Street: A View From the Inside

American Autumn is available to rent or buy on iTunes or YouTube, but in the interest of introducing (or re-introducing) myself, this will remain available here for free.

Click that play button and enjoy. To mark the launch of my new series, Dear Joe Biden, I’ve made my feature documentary film American Autumn available for free, right here.

Acronym TV is proud to present this work free of charge and free of ads. If you are able to support this work with a one-time or recurring donation, click the link below. Thank you- DTjr.

This is an excerpt from American Autumn: an Occudoc. Get the full movie for FREE by emailing at AcronymTV@gmail.com with American Autumn in the subject line.

Written, produced, and Directed by Dennis Trainor, Jr.
“The Labor Movement has been kicked around now for quite a while and they have to fight. They see people fighting, and they see they are fighting the same enemy. This (Occupy) movement has show such an eagerness to reach out to the mainstream of the American public- and the Unions represent the organized part of that… The focus on the 1% and the first time in an American movement (I don’t think even in the 1930’s that the communist party did this in their mass work. I don’t think even they identified the enemy as the ruling class.” – Jackie DiSalvo | Occupy Wall Street Organizer

This is not amateur hour. This is a movie as well made as any Hollywood blockbuster. –MichaelMoore.com

(American Autumn) is calm and smart, offsetting its stridency with discussion, music, even humor, while issuing a call to arms.-The New York Times

American Autumn impresses most where many docs disappoint, expanding its scope without short-changing the wider subjects it covers.​​ –Variety

… this necessary and informative documentary looks at the faces behind the Occupy Wall Street movement… it is an effective, and heartfelt, clarion call. -New York Daily News

An impassioned celebration of the Occupy Wall Street movement.

“Dennis Trainor, Jr, is no outsider, but a gonzo journalist at these events.”

We are the ones we’ve been waiting for. Spread the good news – watch and share American Autumn with all your friends and family.​​ 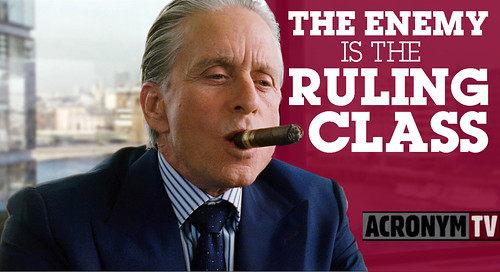 This is a full and uncut interview with Vlad Teichberg, of Global Revolution TV, shot in December 2011 at the squat in Bushwick, Brooklyn where Global Revolution TV had set up studio space, just days before an NYPD raid would rout them from the space. Portions of this interview appear in the documentary American Autumn: an Occudoc (available on iTunes, or set your own price for the DVD).
A New Yorker feature article described Vlad and Global Revolution TV in the following way:

“Global Revolution brands itself as non-hierarchical, but if anyone is in charge it is Vlad Teichberg, a thirty-nine-year-old former derivatives trader. (…) Teichberg was born in Moscow, and moved with his parents to Queens when he was ten. He attended Princeton, where he wrote a thesis on number theory, then headed to Wall Street, where he worked for Deutsche Bank. “I thought globalization was going to create equality around the world,” he said. After 9/11, his views changed. “The politicization of it—using it to start wars, and the Patriot Act and everything—it was obvious we were heading down the wrong path.” He left finance, helped found a grassroots media collective, and poured his savings into the resistance.”

American Autumn: an Occudoc, was the first feature length film to be released on the Occupy movement, receiving critical praise, including:

The New York Times: “(American Autumn) is calm and smart, offsetting its stridency with discussion, music, even humor, while issuing a call to arms.”

MichaelMoore.com: “We now have a film of our own. This is not amateur hour. This is a movie as well made, in technical terms, as any Hollywood blockbuster with Pentagon funding.”

Variety: “American Autumn” impresses most where many docs disappoint, expanding its scope without short-changing the wider subjects it covers.”

New York Daily News: “… this necessary and informative documentary looks at the faces behind the Occupy Wall Street movement… it is an effective, and heartfelt, clarion call.”

This is an excerpt from “American Autumn: an Occudoc”
Get the DVD on a “pay what you can” basis by clicking the link above.

You know that scene from the Oliver Stone film Wall Street when Gordon Gekko- played by Michael Douglass in a role that would win him an Oscar, appears at a shareholder’s meeting of a company- TelDar paper- to defend his actions and his grotesque world view and delivers the now famous speech where he says:

The point is, ladies and gentlemen, that greed—for lack of a better word—is good. Greed is right. Greed works. Greed clarifies, cuts through and captures the essence of the evolutionary spirit. And greed—you mark my words—will not only save Tel Dar Paper, but that other malfunctioning corporation called the USA!”

Every body in the 80s wanted to be Gordon Gekko.
But the thing is this: Oliver Stone wrote it as a piece of Satire. But nobody got it. Just the opposite.

While Oliver Stone was trying to send up the excesses of the Reagan Era, Michael Douglass’s portrayal helped inspire a whole generation of slick backed hairdos in double breasted suits adopting the “greed is good” ethos, and fast forward to today and pursuing the American Dream as it has come to be defined, now delivers obscene wealth for a very few while raining poverty and misery down on many and serving as a homicidal force for others.

Because People do, in fact, die for lack of access to health care in the richest country in the world (that’s the US of A). Human consumption is, in fact, accelerating the destruction of our planet.
People do, in fact, die in wars waged based on lies that profit a precious few.
Over 5 million children globally each year do not reach their 5th birthday because they die of starvation.
All of this is not because the system that puts man on the moon or can squeeze an entire library onto a computer chip the size of a thumbnail has failed to find a way to solve these problems, rather our system, without apology, places corporate greed above human need.

And greed, to take back the popular phrase, is not good.

First Full-Length Film on Occupy Will Be Screened in D.C.
DVD sales to Benefit Occupy Our Homes DC

What: Screening of American Autumn: an Occudoc, with director Dennis Trainor, Jr., present to introduce the film and answer questions afterward.  A number of activists featured in the film will be present as well and available to speak to the media.

American Autumn: an Occudoc is the first feature-length documentary on the Occupy movement. This fast-paced, fact-filled production was filmed in New York, Boston, and Washington D.C., beginning in the earliest days of the movement.  The film recounts recent history in a manner quite different from what many viewers may recall of it.  American Autumn answers those who continue to ask “What does the Occupy movement stand for?”

Kit O’Connel, writing at Fire Dog Lake, raves, “Dennis Trainor, Jr., is no outsider, but a gonzo journalist at these events. . . . He’s intimately involved. Autumn features footage of Trainor’s arrests and his involvement in many other actions. However, he never monopolizes the screen.  Lengthy interviews and engaging speeches are included by political pundits like Dr. Cornell West and Michael Moore, but also organizers, comedians, union representatives, veterans, Verizon workers and regular people who occupy.”

David Swanson, reviewing the film on MichaelMoore.com, writes: “We now have a film of our own. This is not amateur hour.  This is a movie as well made, in technical terms, as any Hollywood blockbuster with Pentagon funding. . . .  American Autumn moves, like Occupy, beyond the streets. We watch home foreclosure resistance in action.  We see a movement building the demand for Medicare for All.  We see the activism and the personal stories of horrendous and unjust, unnecessary suffering — combined with the determination to push back and to do so long-term, relentlessly.  We see labor come into the movement and the possibility realized of persuading organized labor to act on its own behalf and all of ours.  War and the war economy take the stage as central opponents of peace and justice.  Student debt, the environment, energy, agriculture, homelessness, the prison business, and money in elections: these crises and the organizing around them are brought together by resistance to government by the 1%.”

music for this trailer is “Greed”, by Fugazi (Dischord Records)
used with permission

will premiere in June of 2012.
To schedule a screening, or for more information, visit Occudoc.org