Occupy Wall Street: A View From the Inside

American Autumn is available to rent or buy on iTunes or YouTube, but in the interest of introducing (or re-introducing) myself, this will remain available here for free.

Click that play button and enjoy. To mark the launch of my new series, Dear Joe Biden, I’ve made my feature documentary film American Autumn available for free, right here.

Acronym TV is proud to present this work free of charge and free of ads. If you are able to support this work with a one-time or recurring donation, click the link below. Thank you- DTjr.

Get the full movie for FREE by emailing at AcronymTV@gmail.com with American Autumn in the subject line.

ABOUT AMERICAN AUTUMN: an OCCUDOC
A year after the birth of the Occupy Wall Street movement in New York City, writer, director and producer Dennis Trainor, Jr. made a full-length feature documentary capturing the fervor and passion that spread through the nation in fall 2011, fueled a street revolution and introduced the concept of “the 99%” to define the corporate greed that has crippled the U.S.

American Autumn lets the protestors and organizers tell in their own words why they joined the protests and what they hoped to accomplish.

Shot at the birthplace of the Occupy movement at Zuccotti Park in New York City, as well as on location at protests in Washington, D.C., Trainor offers a Ground Zero view of the movement and its participants. On camera, protesters strive to define the goals of Occupy as well as how to achieve them. “Imagine that a single voice carries as much weight as the CEO of Goldman Sachs” the film posits, distilling one of Occupy’s core beliefs.

Protesters adopted the phrase “Place human need above corporate greed” encapsulating their view that the interest of big business has superseded the needs of the individual, and stacking the deck against an average middle-class citizen’s chance to enjoy a simple, debt-free existence.

The influence of Occupy is still felt. The Movement changed the conversation by raising issues like wealth inequity, health care reform, predatory bank practices, and the war on unions, among other issues. In doing so, Americans were forced to grapple with the reality of the downward economic and ethical spiral into which they were locked. Occupy has also revolutionized the way dissidents organize their protests. As Medea Pink, co-founder of Code Pink observes, there will be no more Saturday afternoon gatherings in a deserted Washington, D.C. where everyone marches in a circle and then leaves. Instead, Occupy brought the protest to the town square and “occupied” the space in a very public way. Although Occupy has waged a campaign of civil disobedience and nonviolence, the film includes scenes of brutal police practices such as indiscriminate pepper spraying and physical aggression that were used against the crowd. About 7,000 protesters were arrested within the first six months of the movement, including Trainor, who was jailed twice. 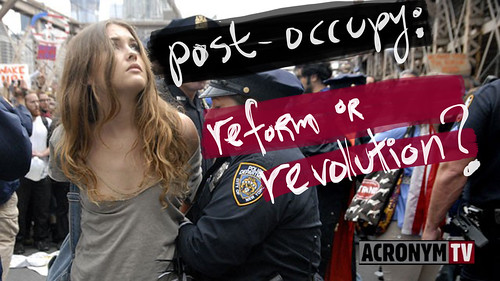 Several activists who were early initiators behind the Occupy movement have formed a new political party, The After Party. Carl Gibson and Radio Raheem are among them and they join Dennis to discuss the launch and future plans.

In the second half of the show, comedian Lee Camp, who performed at several Occupy encampments, talks about his new weekly comedy show, Redacted Tonight, now airing on RT every Friday night at 8:30 and 11PM EST.

About Reacted Tonight with Lee Camp |
With reality now seeming like a Shakespearean comedy, perhaps only comedy can truly bring truth to the people. DC-born comedian Lee Camp and a talented cast do just that with RT America’s first comedy show – Redacted Tonight with Lee Camp. This is not your grandparents’ satire program. Every week Redacted Tonight will provide comedy news with a punch. This weekly satire show tackles all the real news stories the mainstream media failed to mention and provides new angles on the ones they do.

The After Party’s platform is as follows:

We believe that government exists by the consent of the governed and is instituted locally by people to serve their collective needs. We will work to create a responsive government that recognizes the still-unpaid debts owed to the victims of slavery and poverty and we will implement a guaranteed basic income for all citizens.

We believe that we were all immigrants to this land at some point in history, or we were brought here in chains against our will. We all seek a place to prosper, and it is our duty to uphold the sanctity of life, liberty and the pursuit of happiness for all who inhabit the land peaceably, no matter their country of origin or the length of their stay here. We will work to protect and expand immigrants rights.

We believe in a future where humanity can co-exist peaceably with each other as well as with the natural world. We will work for a future with renewable energy and an end to the destructive exploitation of the Earth, while also promoting equitable and sustainable development of our local communities.

We believe in the fundamental right to a quality public education for all our children. In an increasingly-globalized world where advanced education is both essential and ever-more unaffordable, we will work to provide free and accessible higher education for every single student.

We believe that public health is not a commodity nor a product to be sold, but rather a fundamental human right. We will work to provide free and quality healthcare to all.

POLITICIANS ARE PUBLIC EMPLOYEES: THEY MUST SERVE THE PEOPLE

We believe that our democracy requires responsive politicians who regularly account to their constituents. We will work to eliminate the corrupting inﬂuence of money in our elections and level the playing ﬁeld for all political candidates. We will only run candidates who pledge not to accept corporate campaign contributions. 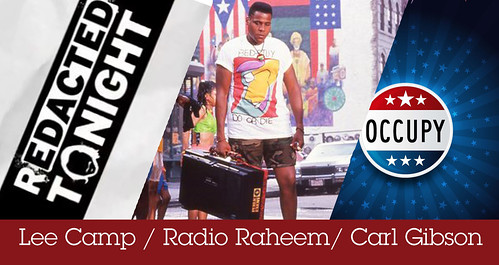 Some of the founding members of the occupy movement are launching a new political party – THE AFTER Party.

Carl Gibson is among them.

He says, “What sets The After Party apart is that 365 days out of the year it is a humanitarian organization. The way we organize politically, what sets us apart is that we are finding needs within the community, and then working to meet them using the community’s assets.”

And, so is Radio Rahim, another After Party founding member and, yes the real life persona behind the character in Spike Lee’s Do The Right Thing says the following:

“There is a little bit of Radio Rahim in everybody (…) we all love our music and we have outrage about different things.”

How will After Party be different than other 3rd party alternatives?

Why start a political party at all?

And should Mookie have thrown that garbage can through the window of Sal’s Pizzeria?

All of those questions asked and answered this week on Acronym TV. What do you stand for? 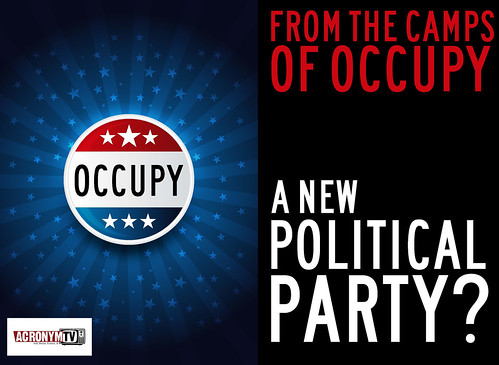 Carl Gibson, co-founder of U.S. Uncut, is joining with other Occupy Wall Street organizers to launch a new populist political party. While more details (including the name of the party and the identities of other key organizers) will be available when the group launches on March 20, the party will be explicitly anti-capitalist.

Says Gibson: “A new party that actively opposes capitalism and unites people around the basic ideas of meeting human needs would be widely respected and immediately acknowledged. This new party could stand apart from the two corporate-owned parties by refusing to take campaign donations from corporations, banks and developers, standing up for the rights of immigrants and indigenous people, calling for sustainable energy and development, making education for all a top priority, and believing in universal access to healthcare as a human right. While it would take time, focusing on building power first at the local and county level is the surest way to make lasting change.”

In this interview with Resistance Report host Dennis Trainor, Jr., Gibson acknowledged that the Green Party is already working along a parallel path, but feels his (soon to be launched) party will do a better job of engaging young people and focusing on local politics as a way to build power.

This is a full and uncut interview with Vlad Teichberg, of Global Revolution TV, shot in December 2011 at the squat in Bushwick, Brooklyn where Global Revolution TV had set up studio space, just days before an NYPD raid would rout them from the space. Portions of this interview appear in the documentary American Autumn: an Occudoc (available on iTunes, or set your own price for the DVD).
A New Yorker feature article described Vlad and Global Revolution TV in the following way:

“Global Revolution brands itself as non-hierarchical, but if anyone is in charge it is Vlad Teichberg, a thirty-nine-year-old former derivatives trader. (…) Teichberg was born in Moscow, and moved with his parents to Queens when he was ten. He attended Princeton, where he wrote a thesis on number theory, then headed to Wall Street, where he worked for Deutsche Bank. “I thought globalization was going to create equality around the world,” he said. After 9/11, his views changed. “The politicization of it—using it to start wars, and the Patriot Act and everything—it was obvious we were heading down the wrong path.” He left finance, helped found a grassroots media collective, and poured his savings into the resistance.”

American Autumn: an Occudoc, was the first feature length film to be released on the Occupy movement, receiving critical praise, including:

The New York Times: “(American Autumn) is calm and smart, offsetting its stridency with discussion, music, even humor, while issuing a call to arms.”

MichaelMoore.com: “We now have a film of our own. This is not amateur hour. This is a movie as well made, in technical terms, as any Hollywood blockbuster with Pentagon funding.”

Variety: “American Autumn” impresses most where many docs disappoint, expanding its scope without short-changing the wider subjects it covers.”

New York Daily News: “… this necessary and informative documentary looks at the faces behind the Occupy Wall Street movement… it is an effective, and heartfelt, clarion call.”